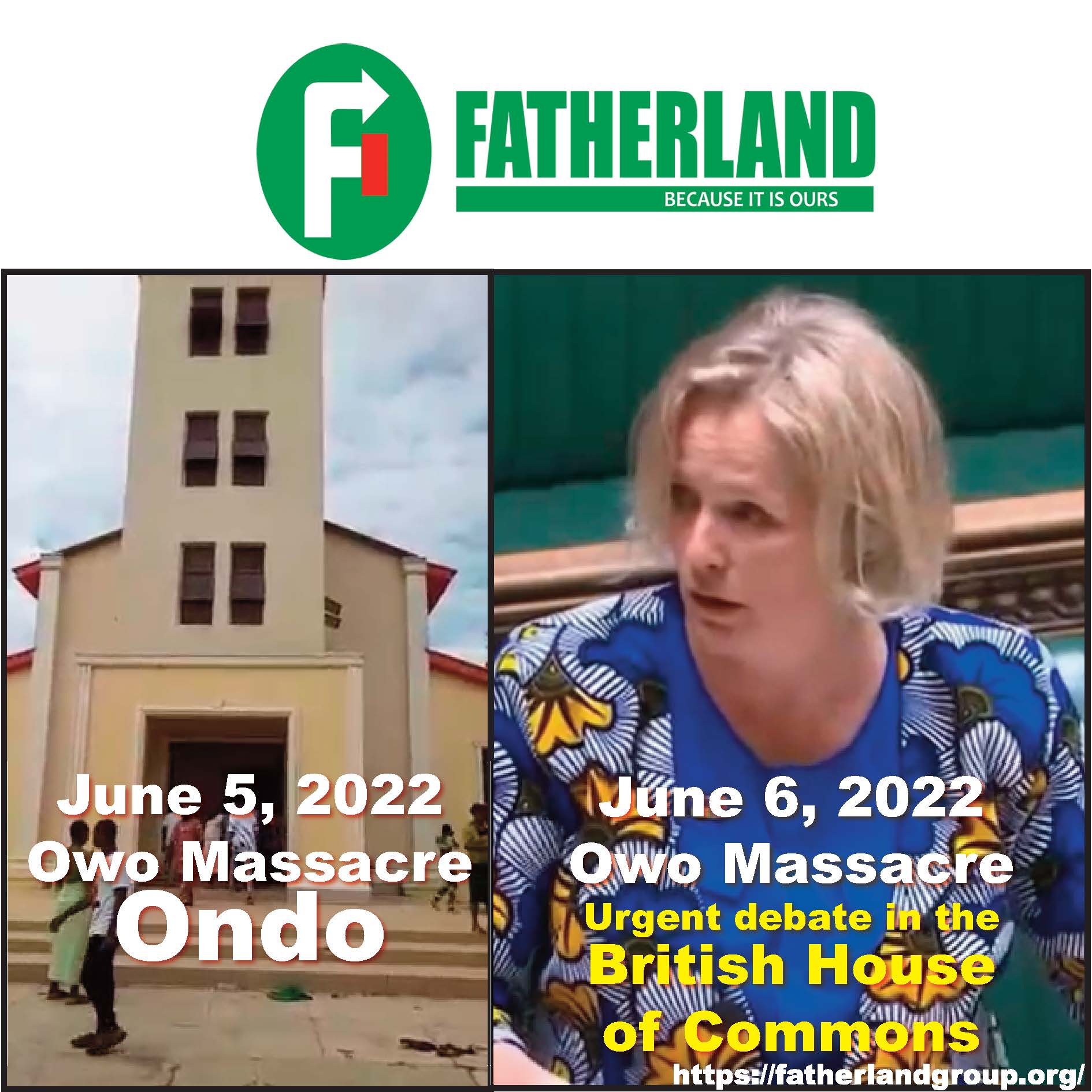 Please click on the video below to listen to the audio version.

On Sunday 5th of June, 2022, gunmen, reported to be Fulani, launched a brutal attack on worshippers at St. Francis Xavier Catholic Church, Owo, in Ondo State, Nigeria, leaving more than 50 people dead, including women and children.

On 6th June 2022, the British House of Commons held an emergency debate at which the  Secretary of State for Foreign, Commonwealth  and Development Affairs made a statement on the killing of church worshippers and on the wider issue of attacks against religious groups in the following terms:

Mr Speaker, I am horrified by the attack which took place against a church in Ondo State, South-West Nigeria, yesterday. I publicly express the UK Government’s condemnation of this heinous act and stress the importance for those responsible to be brought to justice in accordance with the law. The High Commissioner in Nigeria has also expressed our condolences to the Governor of Ondo State and offered our support. I know that the House will join me in sending our condolences to the families and communities of those killed.

Rising conflict and insecurity across Nigeria is having a devastating impact on the affected communities. I have raised this issue with the Nigerian authorities on several occasions, including conversations with Nigeria’s Vice President and Foreign Minister during my visit in February; and during that visit I also met with Regional Governors, religious leaders and non-governmental organisations to discuss inter-communal violence and freedom of religion or belief.

It’s clear that religious identity can be a factor in instances of violence in Nigeria and that Christian communities have been victims. But the root causes are often complex and frequently also relate to competition over resources, historical grievances and criminality; and so the UK Government is committed to working with Nigeria to respond to insecurity.

At our security and defence dialogue with Nigeria in February, we committed to work together to respond to the conflict by supporting local and national peace building efforts in Nigeria, including the Nigeria Governors Forum and National Peace Committee. We are providing mentoring and capacity building to support Nigerian police force units to improve their anti-kidnap capacity and are supporting efforts to address the drivers and enablers of serious and organised crime in Nigeria.

At our security and defence dialogue, we both reiterated our shared understanding and commitment to protecting human rights for all. We are committed to defending freedom of religion or belief for all and promoting respect between different religious and non-religious communities. I discussed with the Nigerian Foreign Minister last month and we look forward to hosting the international conference on [Freedom Of Religion] in July. We will continue to encourage the Nigerian Government to take urgent action to implement long-term solutions that address the root causes of such violence.

The massacre of worshippers in Ondo State followed a similar lethal attack on 5th June 2021 in Igangan, in Oyo State, South-West Nigeria,  in which 17 people were reportedly killed, again by Fulani gunmen and, more immediately, the stoning to death and burning of the corpse of a Christian female student, Deborah Samuel, in Sokoto State, North-West Nigeria, on an accusation of blasphemy, on 13th May 2022.

The Fatherland Group is deeply concerned by the Secretary of State’s attempt to downplay the issues underpinning these incidents.

The Secretary of State surely cannot be unaware of King George V’s edict for the Amalgamation of Islamic Northern Nigeria with Christian Southern Nigeria in 1914?  Or that this was taking place even as His Majesty was convening the Buckingham Palace Conference, in July 1914, to avert civil war in Ireland between Protestants and Catholics over the Irish Home Rule Bill?

Sir, During the negotiations for the independence of Nigeria the view of the Secretary of                State at that time, with which I agreed, was that in Nigeria we should attempt to put together a large and powerful state with ample material resources, which would play a leading part in the affairs of the continent and the world. This was attractive but it involved forcing several different ethnic and cultural groups into a single political structure.

The negotiations were complex and very difficult, the chief problem as I remember relating, significantly, to the control of the police and the military.

In the retrospect of 40 years, it is clear that this was a grave mistake which has cost many lives and will probably continue to do so. It would have been better to establish several smaller states in a free-trade area.

In exculpation, it must be said that we did not then have the examples of the collapse of Yugoslavia and of the Soviet Union before our eyes. It should now be clear for all but the willfully blind to see that it is extremely dangerous to force diverse racial and social entities into a single rigid structure such as that which is being built upon the foundation of the Maastricht treaty. Recent history suggests that it would be best to complete the development of the Common Market and to call a halt to political integration in Europe.”

The  Fatherland Group is, therefore, in no doubt that the key contributory factor and root cause of the many lives which have been lost in Nigeria, including the millions who perished in the Biafra War 1967-1970, is the political union imposed on the communities of Nigeria by the British Parliament and compounded by the 1914 Amalgamation of Islamic Northern Nigeria and Christian Southern Nigeria and reinforced ever since by many other acts and initiatives, none of which have succeeded in curing the underlying societal fractures and pervasive inter-community tensions thus created.

The Fatherland Group therefore rejects the Secretary of State’s apparent failure to recognise this root cause, making only insufficient offers of “mentoring and capacity building for Nigerian police units” and calls on her Majesty’s Government instead to publicly accept its responsibility for past grave errors and to apply more of its considerable resources to finding and helping to implement long-term solutions that recognise and aim to address the historic nature of the root causes of the violence and use them to properly inform solutions.  If this type of approach and solution were to be attempted, it would be an endeavour to which we would be happy to apply our energies.

PROFESSOR BANJI AKINTOYE, THE WORLD-WIDE LEADER OF ILANA OMO OODUA, THE YORUBA GLOBAL MOVEMENT AND EMERITUS PROFESSOR EMMANUEL NWANZE, OF UNIVERSITY OF BENIN, HEAD CALL FOR YORUBA AND IGBO TO SPEAK WITH ONE VOICE