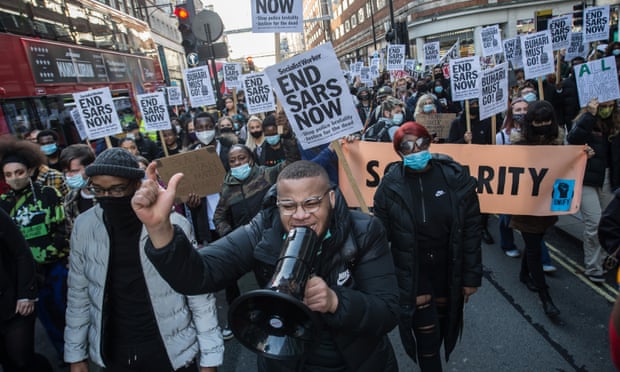 Labour has called for the UK government to consider suspending the funding and training of security forces in Nigeria, where protests against a notorious police unit were brutally suppressed last month.

Kate Osamor, the MP for Edmonton, said she had serious concerns about a lack of oversight of the UK’s role, especially in relation to the special anti-robbery squad (Sars), which was disbanded in October after allegations of killings and abuse.

The same month, protests against police abuses were brutally suppressed by the Nigerian police and military, which have been authorised to purchase at least £127m-worth of UK registered arms since 2008.

Dozens of protesters were killed, including at least 12 people gunned down by soldiers in Lagos, according to Amnesty International. Despite widespread outrage, the army and Nigerian authorities have denied responsibility, dismissing reports of fatalities and claiming footage showing soldiers at the scene was manipulated. Authorities have also set about clamping down on prominent protesters, critics and media which broadcasted abuses.

Labour is also calling for “independent investigations into the allegations against Sars units, as well as military, security and policing forces responsible for attacks on protesters, that could lead to targeted Magnitsky-style sanctions against responsible individuals”, Osamor tweeted on Tuesday.

At a debate in parliament on Monday night, MPs pressed the government to adopt “individualised sanctions such as travel bans and asset freezes” against individuals accused of abuses.

After initially stating that Sars officers had not received UK support, the UK minister for Africa, James Duddridge, said the unit had received “strategic assistance” and training alongside personnel from the wider Nigerian police force as part of a programme that ran from 2016 to March this year.

Osamor, who heads the Commons all-party parliamentary group on Nigeria, said: “The government now needs to come clean and explain how and why that funding took place in the first place. They owe it to the many who have been killed by Sars units to explain who made the decision to fund those units and why.”

There were “serious concerns about the level of oversight attached to government funding in this area”, she added. “Amnesty International and several other international human rights organisations have been very clear that Sars have been directly involved in extrajudicial killings, torture and corruption. The UK government either knew that and decided it would fund Sars anyway or didn’t know where UK funding was going.”

A UK Foreign Office spokesperson said: “It is important that the police in Nigeria respect human rights. We have been working with Nigeria to support reforms to ensure this happens”.

The spokesperson did not confirm whether the government had knowingly provided training to Sars officers and whether assistance or funding to the army or police had ever been reviewed on account of human rights abuses.

A judicial panel has been set up to in Lagos to investigate action by security forces during the October protests, but it has been met with cynicism in Nigeria, where there is a history of government inquiries leading to no prosecutions. Statements by Nigerian ministers defending security personnel accused of abuses and discrediting media reports of recent killings have appeared to undermine ongoing inquiries.

Chi Onwurah, who heads the APPG for Africa, said the UK should press authorities to fully investigate recent abuses. “We need clear, honest, verifiable messages from the Nigerian authorities and a credible investigation to build public trust.

“The enduring influence and consequences of the colonial period on Nigerian institutions, including the police, does give the UK a responsibility to do all we can to support the Nigerian people in reforming those institutions,” she said.

A freedom of information request by the Campaign Against Arms Trade has revealed that the College of Policing, a professional body for police in England and Wales, trained Nigerian security forces last year.Black lives matter everywhere. That’s why the world should support the #EndSARS movementChibundu OnuzoRead more

Since 2015, £43m of weapons have been licensed to Nigeria. UK arms export licensing criteria requires the government to review a licence “if there is a clear risk that the items might be used for internal repression”.

“The government claims that it has a rigorous and robust arms export policy, but, in reality, it routinely arms human rights abusing regimes and police forces across the world,” Andrew Smith from CAAT said. “The UK has a long history of looking the other way whole abuses are being inflicted.”

Thousands of mostly young people took the streets of Nigeria last month in the largest protest movement in years, sparked by footage of killings by Sars officers. The government dissolved the unit on 11 October but the protests continued.

Efforts had been made to reform the Nigerian police force, which was founded by UK governing authorities during colonial rule. Yet according to Isa Sanusi, a spokesperson for Amnesty International Nigeria, its violent origins are still evident in its “emphasis on protecting those in authority and use of force in all aspects of law enforcement”.

… we have a small favour to ask. You’ve read 4 articles in the last year. And you’re not alone; millions are flocking to the Guardian for open, independent, quality news every day, and readers in 180 countries around the world now support us financially.

We believe everyone deserves access to information that’s grounded in science and truth, and analysis rooted in authority and integrity. That’s why we made a different choice: to keep our reporting open for all readers, regardless of where they live or what they can afford to pay. This means more people can be better informed, united, and inspired to take meaningful action.

In these perilous times, an independent, truth-seeking global news organisation like the Guardian is essential. We have no shareholders or billionaire owner, meaning our journalism is free from commercial and political influence – this makes us different. When it’s never been more pertinent, our independence allows us to fearlessly investigate, challenge and expose those in power.

Amid the various intersecting crises of 2020 – from Covid-19 to police brutality – the Guardian has not, and will never, sideline the climate emergency. We are determined to uphold our reputation for producing urgent, powerful, high-impact reporting on the environment that’s read by around the world.

We’ve made institutional progress too, working hard to live up to the climate promises we made in 2019. We no longer take advertising from fossil fuel companies, and we’re on course to achieve net zero emissions by 2030.

If there were ever a time to join us, it is now. Your funding powers our journalism, it protects our independence, and ensures we can remain open for all. You can support us through these challenging economic times and enable real-world impact.

Every contribution, however big or small, makes a real difference for our future. Support the Guardian from as little as £1 – and it only takes a minute. Thank you.